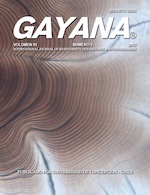 Hermetism, a behavior that isolates ant colonies, was studied in the laboratory between two ant species in Chile, Camponotus morosus Smith and Linepithema humile Mayr. Ants from five nests of C. morosus and L. humile were used, transferring ten individuals per nest of one of the colonies to receiving nests of the other. Conducts, including antennal exploration (AE), mandible opening (MO), dorsal flexion of the abdomen (DFA), biting (Bi), ventral flexion of the abdomen (VFA), fight (Fi), transport of the intruder ant (TI), moving backwards (MB), and death (De) were recorded during ten min, with ten replicates. The times of occurrence ± SD of each event were analyzed with the Student t test. The events AE, MO, DFA, and MB had a short latency time in receiving L. humile, while C. morosus presented lesser latency for the events Bi, VFA, and Fi. When analyzing by χ2 the frequency of occurrence of each event per species, AE and MO were similar in both species, and in aggression and rejection events like DFA, Bi, VFA, Fi, MB, TI, and De, there were greater frequencies of observations in C. morosus that in L. humile. From these results, C. morosus is a more hermetic ant than L. humile.