Population status of the Black skimmer (Rynchops niger) in Chile 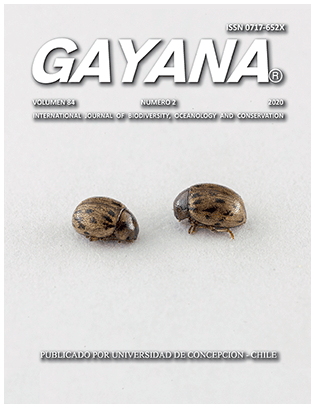 Black skimmers (Rynchops niger) visit the coast of Chile during the Southern summer, being observed in flocks of different sizes, mainly in coastal wetlands. Through the joint use of a database of citizen science observations together with our long-term monitoring, we estimate that the population size for the species in Chile reaches 10,227 individuals. Three sites congregate more than 50% of the population, these sites are the estuaries of Mataquito and Itata river, and Tubul. The analysis of the relative abundance throughout the year for four geographic macrozones would reflect the movement of the species on the coasts of Chile. The Northern zone shows an abundance peak in November with the arrival of individuals, yet its return strategy keeps not being so clear. The Central-North and Central zones of the country show two peaks in the arrival and departure of individuals, suggesting a rather transit use. The existence of a single peak in February, in addition to the highest concentrations of individuals, would indicate that the Central-Southern and Southern areas of the country would potentially be the destination for a large part of the population of black skimmers. The radiotelemetry monitoring of individuals allowed the detection of movement of individuals between a network of coastal wetlands. These displacements would occur frequently throughout the season and both north and southbound. This study provides relevant information for the status of the species in Chile, a country that is habitat for a potentially significant proportion of the cinerascens subspecies during the non-breeding period.