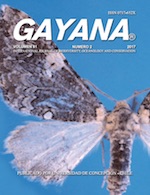 An update on the Eastern South Pacific Intermediate Water (ESPIW) distribution has been possible based on ARGO (Array for Real-Time Geostrophic Oceanography) data. This study comprised over 46,000 profiles obtained during 2007-2012 from an area between the western coast of South America and 150°W, and 5° and 40°S. This information was complemented with data from the World Ocean Circulation Experiment (WOCE) P06 transects conducted in 1992 and 2010 at 32°30’S in the South Pacific Ocean. Based on a comparison of this update and data from 1990-2001, it was established that the ESPIW volume has increased by approximately 53%. Moreover, the area occupied by ESPIW in the 2010 WOCE P06 transect was 48% higher than in 1992. Ekman pumping velocity, calculated from the wind for the time and region of ESPIW formation, showed a significant increase in Ekman pumping between 2000 and 2012. The increase in Ekman pumping from 2000 onward could explain the observed changes in ESPIW distribution (the water mass had extended zonally) and properties (salinity showed a decrease of 0.1). These changes could be explained as the consequence of atmospheric climate variability over the interior ocean.