Characterization and variability of the prokaryotic community in sediments from Salar de Lagunilla, Northern Chile 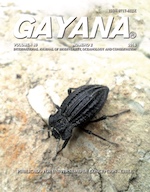 Fluorescence in situ hybridization (FISH) with rRNA-targeted oligonucleotide probes was used to investigate the abundance of prokariotic community from the sediments of different sites and along a temporary-space scale from Salar de Lagunilla, a high-altitude athalassohaline wetland in the Chilean Altiplano. Six different taxonomic groups were studied: alpha, beta, gamma proteobacterias, sulfate-reducing of the delta subclass of Proteobacteria, Cytophaga-flavobacteria and the domain Archaea. The analyses showed the Archaea domain and Cytophaga-flavobacteria group (33.6 % - 20.2 %, respectively) as the dominant group, whereas the groups with minor abundance corresponded to alpha and Beta-proteobacteria (10.7-15.5 %). The prokariotic communities in the sediments also developed differently, as shown by Fluorescence in situ hybridization (FISH) and by nonmetric multidimensional scaling analysis. Changes in prokariotic community composition were followed during three years, where there was a difference in the abundance of the domain Archaea, during the dry season (March-August 2006), which demonstrated the existence of temporary differences, but not space. In addition, Canonical correspondence analysis revealed that the prokaryotic community composition could be influenced by some environmental factors, where important components of the ecosystem such as, limestone and carbon, could play a role in the distribution and composition of the prokaryotic community.