Seasonal and spatial variability of aquatic macroinvertebrates and water quality in the Palena River, Chilean Patagonia 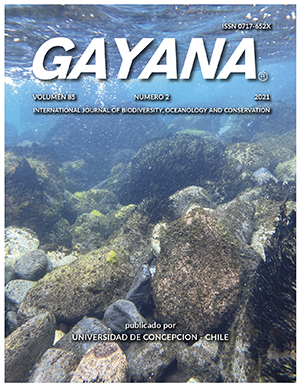 The rivers of Patagonia are some of the best conserved aquatic ecosystems in South America; however. However due to the growing economic development in the region, several bodies of water have been threatened by human activities. We analyzed the water quality and structure of macroinvertebrate assemblages at 8 stations along the Palena River; upstream, where there is minimal disturbance, and downstream, at stations perturbed by human activities. Samples were collected over the four seasons of the year (September 2013 to May 2014). Temperature, electrical conductivity, pH, dissolved oxygen, total hardness, silica, aluminum and iron showed significant differences (p < 0.05) between stations located upstream and downstream in the river basin, as well as between seasons of the year. A total of 30 macroinvertebrate families were registered (90% insect larvae), being Diptera the most diverse order (8 families). Leptophlebiidae family (Ephemeroptera) was the most abundant family in the four seasons of the year throughout. Statistically, there were significant differences (p < 0.05) between seasons of the year, which were grouped in two groups: one summer-fall and winter-spring, but not to macroinvertebrate assemblages between stations upstream and downstream. These findings indicate that the seasonal variations have a greater effect on the macroinvertebrates assemblage composition than the spatial differences in the basin. On the other hand, the great diversity of macroinvertebrates registered in the Palena River, in addition to the good water quality, indicate that the activities in the basin are not yet a risk to the aquatic ecosystem.