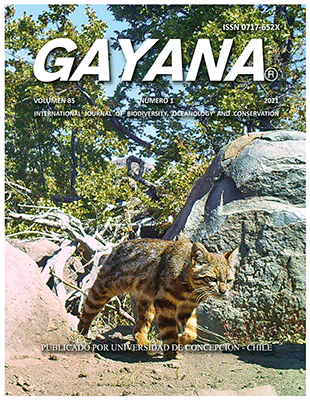 The Batuco Wetland (Metropolitan Region, Chile) is located in one of the priority sites for biodiversity conservation in Central Chile. Given the scarce information about its entomological fauna, the assemblage of riparian epigeal beetles was studied in two seasons: spring (2015) and fall (2016). Around the edge of wetland water body, three types of vegetation (TV) representatives of the dominant plant species were selected. In each of these TV, five interception traps (pitfalls) were randomly installed at a minimum distance of 5 m from the edge per season (n = 30) to capture of the beetles. After its identification, the abundance and richness of the coleopterans and associated trophic guilds were estimated: phytophagous, predatory and saprophagous. Nonparametric tests of Kruskal-Wallis and Mann-Whitney were applied to determine the statistical differences between the evaluated variables. The epigeal coleopteran assembly was made up of six families, 14 genera and 20 species (12 of them native). Epigeal coleopteran abundance and richness were significantly higher in spring in all TV evaluated. In the guilds there were differences in abundance in predators and saprophagous in spring, while by season in predators’ differences were observed in each TV. The information obtained constitutes the first record of epigeal entomofauna in the edge of the wetland and may serve as a basis for future research aimed at conserving this priority site.