Geographic distribution of the striped or variegated toad Nannophryne variegata (Günther, 1870), extension of localities and comments on its habitat in Chile and Argentina. 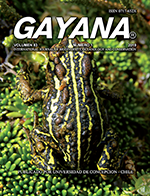 Nannophryne variegata is an endemic species of the southern forests of Chile and Argentina. It has a wide distribution in Chilean territory and to a lesser extent, in Argentine territory. Along this extensive latitudinal distribution, it comprises different ecological regions, characterized mainly by low temperatures and high precipitation. There are few antecedents regarding habitat preferences and threats to this species. This paper reports on new distribution records in the extreme south of Chile and Argentina. It also describes the characteristics of the habitats it occupies and the representation in protected areas of both countries. N. variegata is distributed from 37º28 'to 54º00' South latitude, becoming the southernmost amphibian in the world. It inhabits different environments that include humid forest associations, peat bogs, Magellan tundra and neighboring high Andean environments. It is well represented in protected areas with a large number of observed populations.