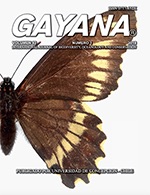 Between 2007 and 2008, we evaluated the seasonal richness, abundance and diversity of bird species in the Isla Mocha National Reserve, southern Chile. We recorded birds in point-count stations (radius = 50 m, length = 10 min) in five habitat types: coastline, pastureland, prairie with trees, forest-prairie ecotone, and Valdivian forest. We also include occasional records outside count points to determine species richness. In total, we recorded 70 species on the island. The habitat with higher richness species was the pastureland (29 species), followed by forest-prairie ecotone, coastline (25 species, respectively), prairie with trees (21 species), and Valdivian forest (17 species). We did not detect seasonal patterns when we compared species richness among habitats. In all habitats, the abundance distribution among species showed the typical pattern of many organisms: few species were very or few abundant, and several had an intermediate abundance. However, the numerical dominance between species changed seasonally. The most regular species were Kelp Gull in the costline and pastureland, Chilean Lapwing in the pastureland, Black-chinned Siskin in the prairie with trees, Chilean Pigeon, Chucao Tapaculo and Thorn-tailed Rayadito in the forest-prairie ecotone, and Chucao Tapaculo, Thorn-tailed Rayadito, and Green-backed Firecrown in the Valdivian forest. All these species showed noticeable seasonal numerical fluctuations possibly caused by the recruitment of juveniles, reproductive congregation and/or variation in food availability. All habitats had a high diversity because they were rich in species and had high evenness among species regarding abundance. In terms avifaunal, the Mocha Island represents a continental "slice" of southern Chile. The similarity in habitat diversity of this island to the mainland result in similar bird assemblages.